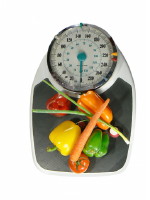 Asparagus is a vegetable that is nutritionally well-balanced. It has over the years been used as both a vegetable and for medicinal purposes. It leads nearly all produce in the wide array of nutrients it supplies. Not just supply but supplying in significant amounts for a healthy eating diet. We will first take a look at what it is that makes asparagus first amongst most vegetables before we get into the nutrition facts.

When considering asparagus and their nutrition facts, we realize that they contain a number of nutrients, vitamins and minerals which are essential for the optimum health of our bodies. These include Dietary Fiber, Protein, Vitamin B1 (Thiamine), Vitamin B2 (Riboflavin), Vitamin B3 (Niacin), Vitamin B5 (Pantothenic Acid), Vitamin B6 (Folate/Folic Acid), Vitamin C, Calcium, Iron, Magnesium, Vitamin K, Phosphorus, Potassium, Zinc and Manganese.

Of these, asparagus nutrition facts have shown us that it is a good source of Vitamin B6, Calcium, Magnesium and Zinc. Above these, it's a very good source of Dietary Fiber, Protein, Vitamin A, Vitamin C, Vitamin E, Vitamin K, Thiamin, Riboflavin, Rutin, Niacin, Folic Acid, Iron, Phosphorus, Potassium, Copper, Manganese and Selenium, as well as chromium. Chromium is a trace mineral that enhances the ability of insulin to transport glucose from the bloodstream into cells.

It is worth to mention that among vegetables, asparagus is the leading supplier of folic acid. Folic Acid is vital for our bodies in many different ways. It is necessary for blood cell formation, growth and prevention of liver disease. Folic acid also sometimes refereed to as Folate or Folacin, has also been shown to play a very important role in the prevention of neural tube defects such as spina bifida.

Spina bifida causes paralysis and death in 2,500 babies each year. So there's something that an expecting mother can add to their pregnancy diet. In fact, it is advised that all women in the child-bearing age range should eat a diet that is rich in folic acid amongst other things, in the event that they conceive. Nutrition facts on a 5.3 oz serving of asparagus show that it provides 60% of the recommended daily allowance for folic acid.

As we mentioned before, from early times the asparagus has been used both as a vegetable and as medicine. This is due to it's delicate flavor and diuretic properties. A physician from the second century described asparagus as "cleansing and healing". Its shoots have long been used in many traditional medicines to treat conditions like dropsy and irritable bowel syndrome.

Facts about nutrition on steamed asparagus show us that the calories in asparagus are low. It also reveals that it's a good source of Vitamin C, which amongst other things helps to boost our immune system.

Raw asparagus nutrition facts show us that once again they are low in calories. One really doesn't have to do much of a work-out to burn these calories. A 2 minute swim can easily burn 27 calories off. Raw asparagus is a good source of Vitamin A, which amongst other things helps with the good health of our eyes. 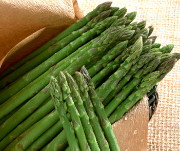 Nutrition facts on canned asparagus show us that it contains a high amount of sodium, this is probably due to the preservatives and manner of preparation. Compared to fresh asparagus and the other discussed in this article, canned asparagus have slightly higher calories.

Although when compared to other foods, it's low. One would rather stick to fresh asparagus and prepare it the way you wish. Unless of course it's a hectic day and you need the convenience of tinned foods. However, be on the look out for foods high in sodium. Sodium is one of the top cause of hypertension. 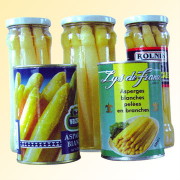 Fresh asparagus can only be said to be so if it has firm spears, hardly flexible and breaks easily. It should also have juicy cut ends. Fresh white asparagus is squeaking when several spears are being rubbed against each other.

So after learning all this about the vegetable asparagus, we can safely conclude that it is a vegetable that one should add to their diet. They can be eaten as an appetizer or as a vegetable side dish, or raw, whatever tickles your tastes buds.

There is a side note though, which has been discovered through research that asparagus causes one's urine to have an odor. This is due to some natural chemical compounds found in it. However, do not let this deter you from eating them! They are after all packed with nutrients, vitamins and minerals in a well-balanced fashion.

Back to Healthy Eating Home from Asparagus Nutrition Facts