Sprite is a lemon flavored , caffeine free transparent soda drink. It is a product of the Coca Cola Company which was introduced in 1961. This was done mainly in response to the now 7 Up drink, which in 1929 time was known as "Lithiated Lemon". From 1978 until now, Sprite has been in the leading position of the lemon soda category.

There are other Sprite varieties which include Sprite Ice, Sprite Super Lemon, Sprite on Fire, Sprite Remix, Sprite Duo, Sprite Dry Lemon, Sprite 3G, Sprite Recharge (which was used as an energy drink), Sprite Super Chilled and Sprite Green. Sprite Ice is a mint-flavored Sprite whilst Sprite on Fire is a ginger- flavored variation. Sprite Remix is a fruit- flavored Sprite and Sprite Duo is a variation of Sprite with lemon juice and less carbonation and sugar.

Sprite 3G is also an energy drink which was produced to compete with Red Bull. It contains glucose, caffeine from green coffee beans and Guarana. In Venezuela Sprite uses the name Chinotto. It is a lemon-lime soda. Sprite Ice is sold in UK test markets. It's a sprite flavor that creates ice when it's opened. Finally sprite green is sweetened with a natural zero-calorie sweetener made from Stevia known as Truvia. It also contains lemon juice.

Nutrition facts on Sprite show us that it contains the following ingredients;

High Fructose Corn Syrup is a sweetener derived from corn. It is a mixture of two simple sugars; glucose and fructose. Sodium Benzoate is used to protect the taste. When it comes to the sugar content, a 12 fl oz can of Sprite contains 38 grams of sugar, that's about 7 teaspoons of sugar.

The daily values (DV) in this article are based on a 2,000 calorie diet. Your values may be higher or lower depending on your calorie needs. 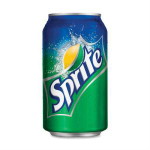 Nutrition facts of Sprite Zero reveal that it has no sugar, fat, calories and like the original sprite, does not contain any caffeine. The sodium content is low, which is a good thing. Ingredients that go into Sprite Zero include; Carbonated Water, Citric Acid, Natural Flavors, Potassium Citrate, Potassium Benzoate (which as we mentioned before is used to protect taste), Aspartame, Acesulfame Potassium (Ace-K).

Aspartame and Ace-K are sweeteners that are also used in Coke Zero. Diet Coke, however only uses Aspartame. You may learn more about these low calorie soda drinks in the article diet coke nutrition facts

This version of Sprite was originally produced in the United States in 1974 as "Sugar Free Sprite. Just under a decade later, in 1983, it was renamed to "Diet Sprite". Finally, in 2004, it was rebranded as "Diet Sprite Zero". The "Diet" part of the name was dropped to leave it being called "Sprite Zero" only. The Zero signifying low calorie and no sugar. This "Zero" designation for low-calorie sodas was first used on Sprite Zero before being used on the flagship Zero product, Coke Zero.

With more and more people seeking to lead healthy eating lifestyles, such drinks may be included in your diet, should you really want a soda pop. On that note, it's important that you know soda nutrition facts, they will help you understand just what is in the drink that you so love dearly! We will now take a look at the nutrition facts of two other Sprite variations. As mentioned earlier, the percent daily values (DV) are based on a 2,000 calorie diet.

The table below serves to show you the differences or similarities in nutrition facts of Sprite, Coke and Pepsi. The serving size for all of them is 12 fl oz.

So there you have it, you now know what is in the soda drink sprite. The decision to have it or not is entirely yours.

Back to Healthy Eating Home from Sprite Nutrition Facts