Whole grain foods are perhaps the most talked about sources of important nutrients that aid our bodies to function in a healthy manner. The question that is therefore often asked is just what foods are considered to be whole grain? To begin with, over 80 percent of foods made from grain that fill our supermarket shelves are not whole grain at all.

This is because most of these grain foods that we eat are so refined they lose their make-up in the process. As the name would suggest whole grain has to do with grain foods that have not been tempered with from their natural state. As the diagram below shows, whole grain foods are made up of a kernel with consists of the bran, endosperm and germ. 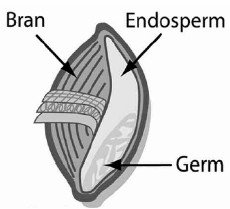 This is very important and it's an area that many unaware individuals are mislead by food company marketing gimmicks. Any grain is considered to be whole grain if after the shelling and other such processes all the three parts illustrated above remain intact in their original composition. Many food processes and refinery stages take away the bran and only presents the white starch or endosperm. This is typical of white rice and flour used to prepare white bread. Whole grain foods have the fiber-rich bran intact, the starchy endosperm and the germ which is the plant embryo in their original proportions. This is the only way we can gain any whole grain foods health benefits.

The design of the kernel above is not originally for humans to enjoy but is for the grain to perpetuate itself reproductively. The purpose of the endosperm is to supply food to the growing seedling. The bran which is the outer hard covering is a protective sheath in the environment i.e weather, insects, bacteria. Today the kernel is a part of our eating healthy.

When parts of the kernel are missing it follows that there will be some important nutrients missing. As mentioned in passing earlier the bran is the outer layer of the grain and provides you with fiber and protein in natural form and rich quantities. The endosperm is the inner core of the grain and will supply you with some starch. The germ has vitamins, antioxidants and will supply your body with some vitamins and essential fats.

Historically it is recorded that early human civilization have always relied on wholegrain foods such as wheat, barley, and oats amongst a variety of other grains. This remained the case for thousands of years until the invention of the roller mill in 1873 which successfully separated the three parts in the kernel namely bran, endosperm and germ. It can be safely concluded that the arrival of the roller mill was the introduction and growth of an appetite for refined foods. This also set modern civilization on a path to a heath disaster. 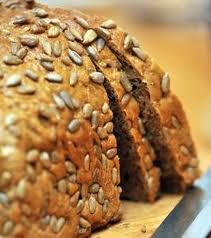 Cereal nutrition facts will show that the health benefits of whole grain foodstuffs are apparent and have been proved by extensive scientific studies. This is the reason behind a renewed interest in how things had been before the advent of the roller mill a milestone that introduced largely harmful refined foods. To begin with, the fiber in whole grains is very useful in achieving smooth functionality of the large bowels.

Wholegrain foods contain what are known as phytonutrients. Put simply these fight disease and are found in most plant based foods. The risk of cardiovascular disease is reduced by whole grain consumption. These unrefined grains are also known to help lower cholesterol levels. high cholesterol leads to strokes , heart disease and high blood pressure through the hardening of arteries and blood vessels. Protection against a variety of cancers is known to be certain wholegrain foods and health benefit.

In as far as the role of whole grain in diabetes is concerned, it is known amongst the medical community that a prudent diet recommended for people suffering from diabetes includes whole grain consumption. Epidemiological it has been demonstrated that whole grain foods consumption reduces the risk of type 2 diabetes. This is so much the case that the American Diabetes Association recommends the consumption of whole grains in preventing diabetes. Whole grains have also been known to be part of those foods that fight pain.

Some experts have explained this link to wholegrain foods promoting satiation per each eating occasion. After eating whole grain say at breakfast an individual may remain feeling full for up to several hours following a meal promoting less food intake over a period of time.

very few people today are eating enough whole grains on a daily basis. Many are not simply because they are not aware of which foods are whole grains. It is important to read food labels to establish if what you are buying is whole grain. Going by the definition started above and what to expert of wholegrain foods it should perhaps be now much easier to identify and weed out counterfeit whole grains which are made genuine by strong advertising. Always remember that "Made with whole grain" does not mean whole grain. The following is a list of some whole grains;

Back to Eating Whole Foods from Whole Grain Foods

Back to Healthy Eating Home from Whole Grain Foods