Chipotle was first opened at a former Dolly Madison ice-cream location in 1993. The founder, Steve Elis, had no intention of expanding. All he wanted to do was to create a place where people can come and eat good food which is made available fast.

The good thing about Chipotle and some, if not most, fast food outlets like Taco Bell is that you can make your own meal from scratch. What would be the most popular way of serving yourself what you want is at a buffet. That way, if you are on a special diet you know what you want to have in your meal.

Or if you've embarked on a eating healthy lifestyle, you can custom make your meal to suite your needs and preferences. This makes you in charge of your calories as well as the amounts of nutrients you put into your body, as well as their quantities. So there won't be anyone to blame should you eat more than your recommended daily needs- You're the one in charge.

Remember to keep you sodium content within your recommended daily allowance. Too much sodium will lead to many adverse health effects such as high blood pressure which will lead to more complications like heart failure amongst many others. The other nutrients are also important to keep in check, in line with your recommended daily allowances. Not doing so may cause you to end up being obese or overweight. And that in itself will also come with many health problems.

Taco Bell nutrition facts also show important nutritional information that we need to know about our favorite meal from that restaurant. Another article which will be helpful is on Starbucks nutrition facts. This is because many of us love our beverages, from tea and coffee to hot chocolate, fruppuccinos and cappuccinos. Follow the link and learn more about the beverages they serve at Starbucks.We will now take a look at the nutrition facts off Chipotle's menu.

This is made up of Tortilla, Rice, Chicken, Hot Sauce, Sour Cream and Cheese. If you substitute your sour cream for lettuce, you will significantly drop your sodium and fat content in the burrito.

As the nutrition facts for Tabasco Chipotle Pepper Sauce show, there are no calories in it. In fact there are no nutrients at all save for sodium which is 5% of your daily value and only 1g of your total carbohydrates.

You can custom make it to suit your diet needs or choose one that does so. This Burrito Bowl includes chicken, black beans, lettuce and medium salsa. Facts about nutrition on Chipotle's Burrito bowl reveal that the sodium content is high. It however is a good source of iron and dietary fiber.

The Vegan Burrito Bowl is made up of cilantro-lime rice, black beans, fajita vegetables, tomato salsa, corn salsa and guacamole. It's a good meal for both vegetarians and non-vegetarians. The only downside to this bowl is that it contains a high amount of sodium.

Guacamole is a popular dip/appetizer. As compared to most of the appetizers at Applebee's this one has a low amount of sodium and saturated fat, which is a good thing. The fiber content is also great. It's a good appetizer to eat. You may also want to make your own healthy appetizers from home. You may follow the link.

Nutrition facts on Chipotle's chips show us that they are a good source of protein as well as dietary fiber. They are also not high in sodium, which is a good thing. They are 'medium' when it comes to calorie density. Although when compared to McDonald's or KFC's or Subways's fries, these have more calories.

You may try the following alternatives which have fewer calories and are healthier; Chicken Burrito healthy or Steak (or chicken) fajitas. Chipotle nutrition facts show us that the good thing about this salad is that it contains no sodium and is a good source of carbohydrates. The not so good thing is that the fat content is very high, 74% of your daily value. You can also make you own healthy salads from home or healthy chicken dishes. 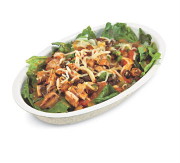 So there you have it. When you go and dine at Chipotle, should you wish you can custom-make your own meal which best suits your diet and calorie needs. You are the one in charge, don't let your stomach be in charge.

Back to Eating Healthy Home from Chipotle Nutrition Facts