Wendy's was first established in November of 1969. The founder, Dave Thomas wanted to create something new and different. But most important of all he wanted to create this using the freshest ingredients, served in the way that the customer wants it.

Quality was and still is at the top of their priorities list. This is where the line- 'Quality is our Recipe' came from.

In 1976 the 500th Wendy's restaurant was opened and just two years down the lane the 1000th restaurant opened. In line with wanting to provide healthy eating options for their customers Wendy's introduced a Salad Bar in November of 1979. For those who would wonder how to eat healthy on the go Fresh Salads To Go where introduced on the Wendy's menu in March 1992.

In March of 2002, Garden Sensations which include Mandarin Chicken, Chicken BLT, Taco Supreme and Spring Mix were introduced to the Wendy's menu. These salads are entree-sized. Once again, another opportunity for customers to eat healthy. July of 2006 saw Wendy's implementing the 0g trans fat scheme on most of their menu items. There however still are some menu items that contain trans fats, such as the Triple w/Everything and Cheese which has a high content of 3.5g. It therefore would not be advisable to eat such a meal everyday.

McDonald's nutrition facts and Subway nutrition facts have shown that they have also eliminated trans fat from their meals. But like Wendy's and most of the fast food outlets, there still will be some menu items which contain trans fat. One just needs to be careful when eating these foods. This is because trans fats increase the amount of bad cholesterol in our bodies which can then lead to heart diseases. We will now take a look at the nutrition facts off Wendy's menu.

Facts about nutrition on Wendy's large chili show us that it has high amounts of sodium. Too much sodium in your system will eventually lead to high blood pressure which can lead to a stroke. Just make sure you manage your daily needs well so as to avoid over-shooting your recommended daily allowances. We're not saying you should deprive yourself of those things you once in a while crave for just because they are high in certain minerals. Balance is the key here.

When considering Wendy's and their nutrition facts on the Chocolate Frosty small, we realize that it can be classified in the "okay-to consume" group. This is because, although it does not contain high levels of sodium or fat, the sugar content is a bit high. In fact, the sugar content in this frosty is equivalent to almost 9 teaspoons of sugar. This is even more than the amount of sugar in some soda pops such as coca cola, sprite and pepsi just to name a few. So have this once in a while, not everyday. Too much sugar is not good for our systems. 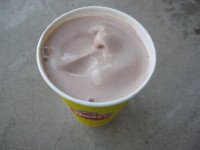 Nutrition facts on Wendy's Apple Pecan Chicken salad reveal that it a great source of dietary fiber which is essential for our bodies. Amongst other things, fiber helps with digestion. This is especially important for those who suffer from constipation or irritable bowel syndrome. The sodium content is however too high.

This breakfast will provide you with just over half of your daily needs of protein. Again, the sodium content is high. You will need to manage the rest of your meals during the day so you don't over-shoot your recommended daily allowance.

Nutrition facts on Wendy's double stack show us important information. Calorie-wise, this would be classified as fair. The sodium content is also fair. Not too high but not so low. Overall, it's an okay meal to have.

This sandwich is somewhat halfway when it comes to being classified as being healthy or unhealthy. The reason being on one hand it contains some dietary fiber which is good for our bodies, as well as protein. However, on the other hand it contains a fairly high amount of sodium which as we discussed earlier can lead to hypertension if consumed in excess.

This menu item was introduced for those who love bacon and just can't get enough of it. The downside to this meal is that it's high in calories and sodium. It surpasses your recommended daily allowance for saturated fat and gives you a whooping 97% of your total fat daily value. You can maybe have this once in a very long while. Truth be told though, it's not a healthy food choice. Our bodies are sometime notorious for craving for those things that are not so healthy. You will have to train your taste buds to crave for the healthier things. And have these off your meal plans completely. 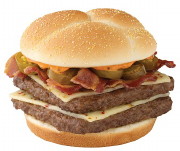 The triple baconator is even worse when it comes to nutrition. You would have surpassed you recommended daily allowance for sodium, saturated fat, fat and cholesterol in this just one meal. If you are on a 2,000 calorie diet, this one meal leaves you with just 640 calories to divide between the rest of your meals and beverages for the day! Although you would have eaten more that enough for the other nutrients. You should be the judge as to whether you should consume it or not! Another alternative would be to deconstruct it and place healthier options in it.

This salad can be good enough as a meal on its own and not as a side dish. This is because of the amount of calories it has. Once again the sodium content is high. Be careful to watch on your sodium intake.

French fries are a common side dish for a lot of people, whether you go to KFC or McDonald's, you will definitely see enough people eating fries. At Wendy's, their medium french fries are a great source of dietary fiber. Their sodium content is good, just 14.5% of your daily value.

Nutrition facts on Wendy's 5 piece chicken nuggets reveal that they are low in calories and sodium which is a good thing.

Grilled meals are the way to go when you want to eat healthy out. The fat content is low and so are the calories. However, the amount of sodium is a bit on the high side, almost half of your daily value. You will need to balance the rest of your meals and beverages.

The good thing about Wendy's M&M's Twisted Frosty is that it contains very little sodium and a little bit of fiber. However, the sugar content is terribly high. It even surpasses the soft drinks which have been labeled "liquid candy" because of the amount of sugar in them. This frosty contains a whooping 15 and a half teaspoons of sugar! This one would be a no go area or a once in a LONG while treat!

Nutrition facts on Wendy's plain baked potato make us give it not just one but two thumbs up. This is because it is low in calories, contains no fat or cholesterol and just 0.4% of your sodium daily value. You would rather go for these as opposed to french fries. Or perhaps have these more often than you have french fries.

The above table shows the nutrition facts for a few menu items found in Wendy's Canada restaurants.

As we mentioned earlier, the passion at Wendy's restaurants is to provide the customer with quality, fresh and choice food. You as the customer can modify a meal to suite your diet and calorie needs. When you do this you avoid over-eating which may lead to being overweight or obese. It's also important that we watch what we are allowing our children to eat. This is because cases of childhood obesity are fast on the rise globally and one of the major causes of childhood obesity are diet. So here's to you making healthy eating choices for you and your family.

Back to Healthy Eating Home from Wendys Nutrition Facts